The whole country goes into meltdown for Easter. I’m in the UK and it’s as much a tradition here as it is back home in Ireland. Maybe even more so. The Easter break is one of expected get away plans and adventures especially for those who are London centric for most of the time. Through out the week people have been sharing their plans and in many cases counting down the days to ‘the escape’.

This isn’t the experience that I grew up with.  Back home there were significant expectations… as someone who grew up in a rural Irish Catholic part of Cork, no one spoke of ‘get aways’,  sure there was ‘the stations’ to go to. Basically the entire weekend revolved around trips to the church.  Now even from a young age, my basic thinking was all this was daft. I can’t hide it. I’m in no way religious and so I couldn’t take any of the expected religious endeavours seriously…all I really wanted to do was to remonstrate with anyone who would enter into a debate with me.

I remember looking around the church full of people who had clearly great intentions, and yet I just couldn’t wait to escape. I found the whole thing just so small minded. Back then, the church was old and tired, paint had come off the walls from the condensation and hung in large curtains before falling at the most in appropriate (hilarious) times and lifting the entire congregation from their devoutness. The heaters, suspended far too high from the ground, when on, provided little heat and in any case were turned off because of ‘cost concerns’ the majority of times I had been there.

The Easter weekend had a series of expectations between stations, (There are 14 (14!!!) stations, where you are called to meditate on a specific event from Christ’s last days, say prayes and then move onto the next until all 14 are completed), of which there were two sittings, and then the Easter Mass on Sunday. Where everyone was supposed to be renewed and full of the joys again.

Now I don’t begrudge anyone their beliefs. But I grew up in an Ireland where if you had a voice, or even threatened to question, well God basically, bad things happened. In school we were (forced) to learn about religion. Now I wanted to learn about all religions, but no, in Catholic Ireland if you were not of ‘the faith’, you basically were not welcome in our religion class. Through primary and secondary school, I saw class mates leave class so that our religious education could continue to be forced down our collective necks. Now I am much more balanced these days than I was back then… but clearly my method of questioning was not acceptable as I was sat outside the principles office (actually on more than one occasion) to ‘apologise for myself’.

So I took the debate to English class. I can’t remember what we were studying, it might have been Romeo and Juliet and I started on about religion etc. 20 minutes later, I was sat outside the principles office (again) by the English teacher who told me on more than one occasion that I would… and I quote, ‘never make anything of myself’ and that my ‘English composition lacked imagination’.

You do have to have a sense of humour with all of this. It was humour that became my vehicle. I realised quickly that direct statements like ‘you can’t honestly tell us you believe in all this hocus pocus, you are our science teacher… where do you come down on the creation of the universe’ was not as subtle as it could hav 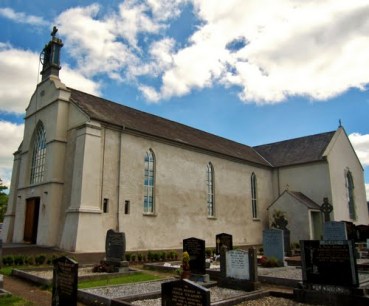 e been… although tbf the class erupted…

Later in life, returning home became literally the most hilarious of encounters… the same people who had shared the cold church with me would ask questions like, ‘how do you survive in the big city?’

At that stage this was Dublin, which to their mind was fraught with all sorts of dangers, physical, sexual (I might meet a boy or worse… a girl…so small minded) I might even be drawn to the delights of other countries. To the parish priest who heard where I was living and asked ‘sure who’s there?’ Now the context of the question was clearly lost on me. I could only reply that, many people lived in Bray, but he was asking about the Parish Priest. Having never been inside the imposing railings of the church in Bray… I was completely unable to answer. His eyes told me he was far from impressed.

When they heard I was living with a boy… many prayers were said for my salvation. It has to be said, in all of this my mother seemed to walk an interesting line. She completely shared my beliefs, and she wasn’t afraid to say so, in fact, when I arrived with the shameful ‘on record’ card for ‘disrupting the peace of religious class’, she told the powers that be that she didn’t see the need for punishment, that too few people asked questions… She also had an uncanny dislike for the clergy well before all the scandals of the Irish Catholic Church were revealed. When we were all rounded up for Sunday mass, somehow Dad knew not even to ask her if she was going… me on the other hand… in some ways she was my hero.

This Easter… I am off to Canterbury and the Isle of Sheppey, after this, I fully expect to be struck down on entry to the Cathedral by the hand of God.

View all posts by KiyoCiara